With the emergence of variable fonts, foundries have increased their graphic and interactive experimentations in order to better represent and develop the dynamic specificities of this new format. The type specimen, this mise en scène of the specificities of a character, has historically been a singular space for expression and communication imbued with audacity and energy, whether on paper or onscreen. Consequently, a reflection upon the evolution of the representation of the letter by its designers, from ancient times to the present day, would enable us to discern what elements have been perpetuated, renewed, or when radically innovative forms were adopted, through the examination of printed specimens or the practices of moving typography.

Since the 16th century, font foundries have consistently published type specimens, or “proofs,” for new characters, as well as for existing fonts, as incentives for commissions from editors and printers. Over the course of the 20th century, graphic designers became their main prescribers. These astonishing publications increased exponentially, growing ever more complex in proportion to the increasing production of various alphabets. There was also the plethora of signs that complete them, as well as versions in various writings. Along with the presentation of all the characters of the font and specimens made up in the various point sizes, weights, and styles, sometimes including an example of their application, these publications also featured several vignettes, ornaments and fleurons, even “showcases” or “all-purpose” engravings. These practices have continued despite the advent of photocomposition, the almost complete liquidation of traditional foundries, and the arrival of digital printing. Indeed, even the term “foundry,” which has continued to be used, has assumed a largely symbolic significance. Although there have been few systematic analyses of the tools of commercialization and promotion used by foundries, they do make up a highly significant corpus that illustrates the preoccupations, biases, and evolutions of typography, making them a precious resource for historical research, one that increases the appreciation of this discipline as a sphere of creation in its own right.

As of the late 16th century, type foundries that were independent of publishers and printers began to make their appearance throughout Europe. One of the most renowned, Egenolff-Berner, was located in Frankfurt, which, from that time on, was a Mecca for the worlds of publishing and typography. In 1557, Jacques Sabon, a Protestant French typographer who had fled the wars of religion, began working at Egenolff-Berner and later took over as head of the enterprise in 1571. The foundry was generously provided with French fonts from Claude Garamond, Pierre Haultin and Robert Granjon. In 1580, after the death of Sabon, his widow married Conrad Berner, who in 1592, published one of the first type specimens destined for a print shop clientele. 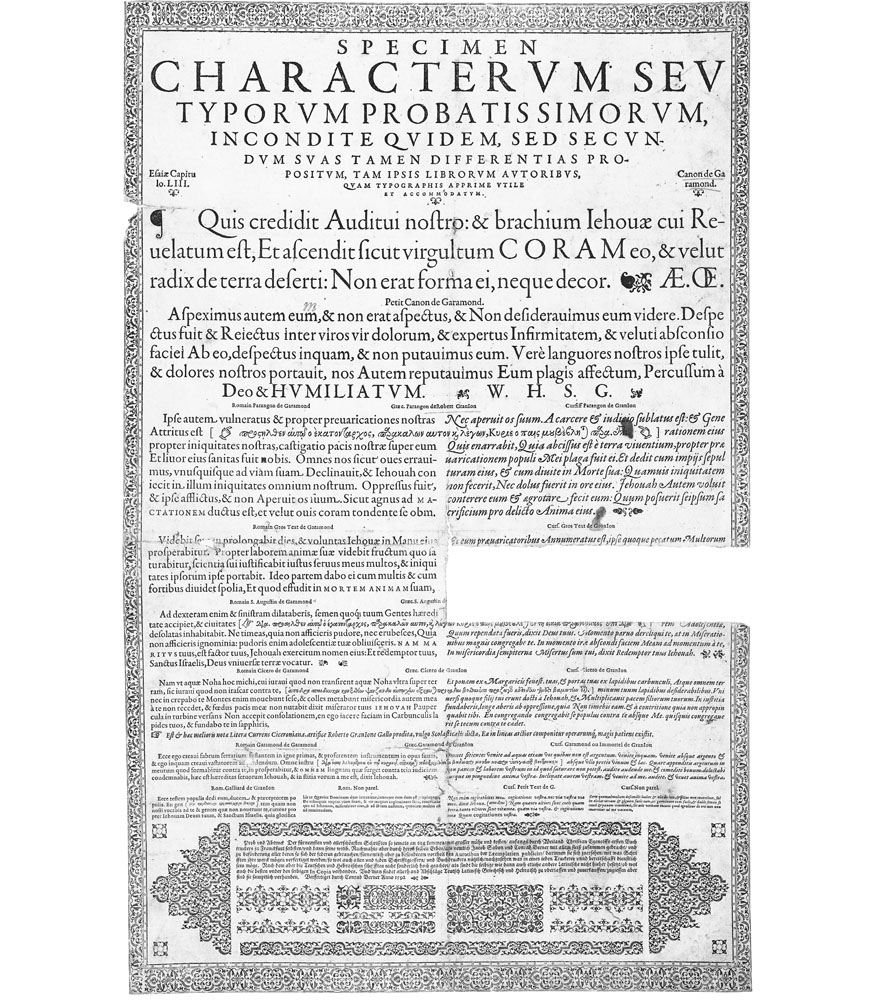 The aim was to facilitate the selection of the font with which their work would be best accomplished. The roman fonts presented were grouped under the appellation Garamond, and the italics were attributed to Granjon. This new association marked the beginning of the “roman/italic” coupling as necessary to all typographic systems and the basic corpus of a font. The…